This article first appeared in our April 2020 Landowner Newsletter. Read more on our Publications page.

While each of the Minnesota Land Trust’s nearly 600 properties protected by conservation easements are unique, there’s one property in southeastern Minnesota that also has important historic and cultural features worthy of preservation, according to the conservation easement itself. In that case, it’s the ruins of an old brewery, complete with its beer cave.

The 21-acre property, located just outside Brownsville in Houston County, has been protected since 2005 when Greta Lockhart donated a conservation easement to the Land Trust. Greta passed away in 2014 and the property is now lovingly stewarded by Patty Burfield and Michelle Smith. The property features a steep bluff, woods, pines, and a small pasture. Wildcat Creek runs near the northern border of the property and a spring-fed creek crosses at the south. That steep bluff’s potential as a future cave and the abundance of spring water may have attracted brothers Valentine and John Fetzner to the property in 1871, when they developed the property as a brewery. Besides, the only other brewery in town at the time was reportedly having trouble keeping up with demand, according to a 1919 history of Houston County. 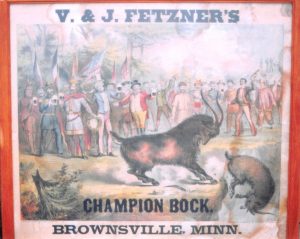 The Fetzners ran their brewery for nearly 30 years before selling it so that they could retire. The brewery, first known as the V. & J. Fetzner Brewery and later as the Brownsville Bluff Brewery, stayed in operation until 1910, when the establishment burned and was never rebuilt. Greta Lockhart, who granted the conservation easement to the Land Trust, built a home at the property in the 1990s. At first glance, you’ll swear the house is one of the original brewery buildings. Patty and Michelle are equally proud of their property’s heritage and tell folks, including their Hip Camp guests, that you can still see the brewery’s foundation walls and even hops growing at the property. They will gladly paddle you across a small pond to visit the beer cave, which was used to refrigerate barrels of beer produced at the brewery.

Patty and Michelle also point out that there’s trout in the spring-fed creek and pond. As it turns out, Valentine Fetzner not only brewed beer and reportedly kept bees at his nearby farm, but may have been one of Houston County’s early conservationists. In the 1875 first annual Report on Fish Culture, the state Fish Commissioners reported that it had delivered 5,000 brook trout to one V. Fetzner to stock the streams of Houston County. 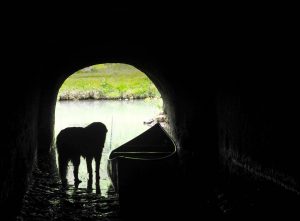 The cave that used to store beer still exists and can be reached via a short paddle. Photo credit Sue Steinwall.

The beer cave is still there as are the brewery’s foundation walls. The hops in the field and the trout in nearby creeks may also trace their roots back to the work of the Fetzners. So, the next time you hoist a cold one (the best refreshment after threshing, according to the Brownsville News, circa 1900s) think of Valentine and John Fetzner. Be sure to also toast Greta Lockhart, Patty Burfield, and Michelle Smith for their great love of this unique protected property.