The first find of the day — right next to the parking lot — was a tiny green caterpillar. After that they came thick and fast: a toad, another toad, deer prints in the mud, a snakeskin, and most thrilling of all, a tiny garter snake. 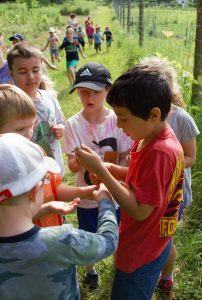 It was the last day of day camp at Shepard Farm, and that meant an animal hunt for the 20 first and second graders who had also learned about edible plants and how to light a fire without a match. And even though hopes were dashed when camp leader Mick Garrett said there were no grizzly bears to be found, the kids embraced the safari with the zeal of courageous explorers. After all, these 140 acres of old woods and fields in southeast Washington County, now owned and managed by the Dodge Nature Center, are one of the best places in the Twin Cities metro area to see wild creatures.

And it’s been that way for 25 years — ever since the Minnesota Land Trust worked with the original owners to place Shepard Farm under a conservation easement. Back then that kind of land protection was a rarity.  But over the past 28 years, the Land Trust has worked with more than 150 private landowners to protect — forever — nearly 17,000 acres of the Twin Cities metro area’s most treasured places. Metro-area projects now account for over a quarter of the total acres the Land Trust has protected statewide. And those rare, green refuges in urban areas are increasingly important for water quality, wildlife, and recreation for Minnesotans who love the outdoors. But, even more importantly for the people who live in the metro area, they offer “nature nearby” that can enrich their daily lives.

Washington County is one of the metro counties taking a lead in land protection, an effort that officials said could not be done without the staff at the Land Trust.

“They are so skilled at this work,” said Washington County Senior Planner June Mathiowetz. “They know what to look for and what to do. That expertise is invaluable for the county and getting these conservation easement transactions completed is one of the most efficient ways to protect land.”

Washington County commissioners have set an ambitious and clear plan for land protection throughout the county with the full-hearted support of the people who live there. Seeing the future rate of development articulated in the county’s Comprehensive Plan, in 2006 county residents voted for a referendum authorizing the county to use $20 million in public bonds to pay for land protection.

The referendum inspired a long-range project to identify the highest priority areas for protection — 10,000 acres of lakes, streams and forests, plus the bluffs along the St. Croix and Mississippi Rivers.

Using historic land surveys from 1847, county land planners know what it used to look like before European settlement and agriculture first altered the landscape. And with the help of modern biological surveys by the Department of Natural Resources, they’ve ranked parcels with the highest species diversity, the most aesthetic value for the community and greatest benefit for water quality.

Today, they are flooded with calls from private landowners in Washington County who want to know how they can preserve their land for the next generation, and how to restore it to the best condition. Many of them will join the 70 Washington County landowners who together have already placed nearly 4,000 acres into conservation easements with the Land Trust.

This year the county, along with the Land Trust, is launching a new outreach effort to educate landowners about options — including conservation easements and funding for habitat restoration. Together, they will explain how the county and the Land Trust can combine different local, state and federal grants, and bring in a wide variety of expertise from other partners to accelerate land protection for future generations. 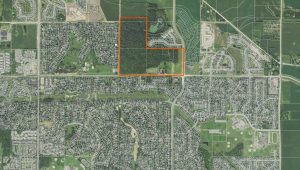 In hindsight, the decision to protect Shepard Farm looks prescient. In 1920 Roger and Katherine Shepard, of St. Paul, bought 140 acres of what was then rural Cottage Grove property to use as a summer estate. Years later, their daughter Constance Shepard-Otis entered it into a conservation easement with the Land Trust in order to keep her parents’ vision for the land alive. She gifted it to the Wilder Foundation and they then gave it to the Dodge Nature Center. That created a second environmental education site for the nonprofit, which operates programs for adults and children on 320 acres 15 miles away. 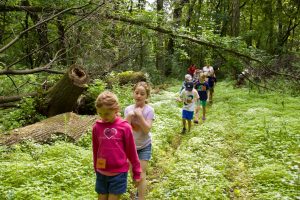 “It stands for what we believe in,” said executive director Jason Sanders. “We can use this to create new stewards of the world, and to expand our environmental education approach to a new community.”

Today Shepard Farm rises like a green island above a sea of suburban development. Farm animals are back, and this summer the voices of children again rang out among the trees and vegetable gardens as Dodge launched their first summer day camps.

And soon the public will be able to enjoy it as much as the kids. Once the parking lot is complete and permanent bathroom facilities are installed, Dodge Nature Center expects to open it up to anyone who wants a peaceful walk in nature.

“It’s an extremely quiet place,” said Sanders.  “You will notice birds that you don’t see in the middle of the city.”

Not to mention toads and deer and snakes.