The land speaks, and the artist translates 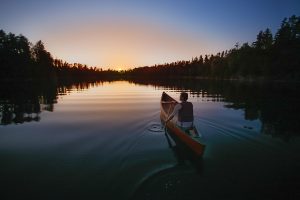 The setting was spectacular: a waterfall gurgling over lichen covered boulders. Tall pines standing sentinel over a pristine lake in the wilderness of northern Minnesota. Boggy, nearly impenetrable wetlands harboring the secrets of the surrounding boreal forest, the tranquility broken only by the raucous cackling of a raven.

It was a place that eventually brought fame and good fortune to this humble photographer from Luverne, Minnesota who “grew up in a cornfield where nothing was natural.”

This place is Judd Lake, a remote Border Country lake just off the Fernberg Trail east of Ely.

Millions of people all over the world immersed themselves in Jim Brandenburg’s iconic photographs of wolves, lynx and bear that he photographed on this remote and wild Judd Lake property. Even James Taylor called, asking to visit Jim so he could see a wolf. 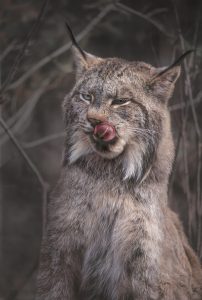 When viewing Jim’s photographs, the world saw wolves thriving in huge expanses of pristine wilderness. But Jim and Judy saw the landscape changing around them and the very real threat of roads, docks, cabins or even logging taking place on their beloved refuge.

In a nice turn of fate, the photographs ended up saving the land. But we’re getting ahead of ourselves.

“The path has been long and rocky”

As a young man, Jim Brandenburg recalls skiing out to Judd Lake during one of his first visits to the north country. At that time he knew that this was a very special spot that not only deserved a voice, but that this voice would tell life changing stories through his images.

Enthralled with this landscape, he created a small “bush camp” on the lake, which became the setting for most of the images in his beloved books such as Brother Wolf, Chased by the Light and the Nature 365 video series.

As they immersed themselves in the rugged northern lifestyle, Jim and Judy recognized that the wild nature of this land was at risk. The property surrounding Judd Lake had been broken into smaller and smaller private parcels as the generations passed and family members moved away.

Over many years, Jim and Judy set out to reassemble this fractured land. Bit by bit, by taking out small loans and taking small risks, the Brandenburgs were able to purchase and piece together key private parcels around Judd Lake in order to fill in the gap between huge tracts of federal forest which surrounded them.

But one key private parcel on Judd Lake remained just out of reach, creating a glaring gap in an otherwise seamless, unbroken landscape.

Daunting obstacles remained, yet the Brandenburgs were steadfast in their desire to permanently preserve this land.

Patience and perseverance win the day.

During his childhood in southwest Minnesota, Jim daydreamed about having a place Up North. He could picture the tall pine trees surrounding a cabin with smoke curling from the stone chimney. Next to the cabin stood a wolf.

At the time, it seemed like an impossible dream for a kid of modest means. 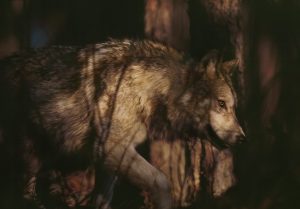 Recently Jim reminisced about his early years, hunting and fishing like everyone in his family and like all of his friends. In fact, calling himself a ‘bounty hunter,’ Jim told of selling pelts for spending money as a teenager.

But all that changed with his first photograph. “I was obsessed with everything in my viewfinder that didn’t have the hand of man in it.”

That photograph set in motion a string of events over decades that resulted in the recent permanent protection of the Brandenburg’s Judd Lake property.

The making of a deal

Recognizing that they couldn’t meet their preservation goals without help, the Brandenburgs partnered with the Minnesota Land Trust, the Trust for Public Land, and the Leuthold family to complete a unique and complex transaction.

Thanks to the Trust for Public Land, the neighboring parcel which had eluded the Brandenburgs was finally purchased, realizing the dream of securing a seamless complex of hundreds of acres of wildlands around Judd Lake. Investment advisor Steve Leuthold and his family generously provided the funding to complete the transaction.

And finally, the Minnesota Land Trust crafted a conservation easement over the entire complex, ensuring that Jim and Judy’s dream of preserving the wilderness around Judd Lake would endure forever. 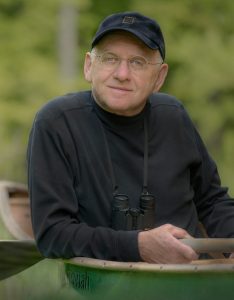 Ultimately, through ingenuity, perseverance and the power of relationships, a creative path for preservation was found.

Executive Director Kris Larson expressed gratitude to all the partners, stating “great projects require great partnerships—no individual or organization can go it alone when it comes to important, complex transactions like these.”

Steve Leuthold has helped develop and fund large scale wilderness projects around the country, from Maine to Colorado. The Leuthold family’s vision and dedication to wilderness conservation were essential to this project. Steve Leuthold summed up his legacy of philanthropy by stating, “I’d rather be associated with a wilderness forest than have a building with my name on it.”

“The significance of permanently preserving this land is hard to quantify,” says Larson. “It’s more than just an important piece of real estate. It’s part of northern Minnesota’s mystique, part of an artist’s palette and part of two family’s conservation legacy.”

Not long ago, Jim and Judy began to feel that time at their cherished Ravenwood was coming to an end. The land had sustained them, and helped them prosper. The wolves and all the other forest creatures had prospered as well. The Brandenburgs felt that it was their responsibility to preserve the land before they left for good. 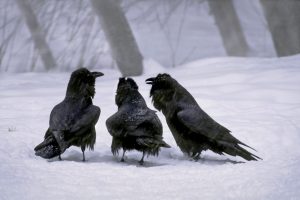 They also wanted to honor the significance of the place where Jim created his monumental body of work.  As Jim says, “The camera drew me there but in the end it’s the land” that matters.

Jim ponders the interconnectedness of his camera and the fate of his land. “I was gifted with certain advantages in life and I can’t think of a better capstone of what I was meant to do than to enable a property like this to live in perpetuity.”

Jim reflects on his work with the Minnesota Land Trust. “It’s been a 5-star experience. Besides my children, the process of preserving this land on into the extreme future is the most rewarding thing I’ve done in life.”

This project was made possible by Minnesota Land Trust members, the Trust for Public Land and the Steven C. Leuthold Foundation.