On Interstate Island in the Duluth-Superior harbor — straddling the Minnesota and Wisconsin state line — 40,000 Ring-billed gulls hang out. They’re relatively safe there, and the french fries are easy pickings from nearby Canal Park tourists.

This island was historically about 5 acres of gravelly sand, but because water levels have been rising, flooding has reduced its size by about half. For the prevalent Ring-billed gull the situation isn’t so bad. However, for the 200 Common Terns that share the island with them, it’s a crowding problem. 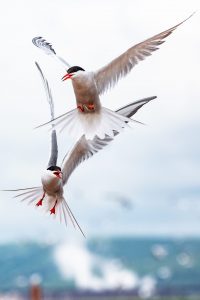 The Common Tern, which is classified as a Threatened Species in Minnesota, has a high “site fidelity” – which means they return to the same nesting site year after year. Unlike the Ring-billed gull, it’s imperative for the tern’s survival to have this specific nesting habitat intact upon returning each spring from South America. Some of the terns have been nesting on Interstate Island for over 20 years which is one of only two tern colonies in the entire Lake Superior basin. 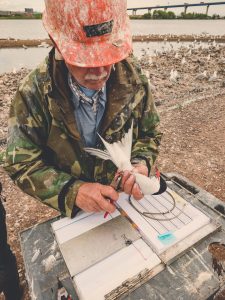 Recognizing the dire situation, the Minnesota Land Trust and Minnesota and Wisconsin Departments of Natural Resources are leading the charge to combat the loss of nesting habitat.  Numerous agencies, including University of Minnesota Natural Resources Research Institute and U.S. Fish and Wildlife Service, are also joining in restoration efforts by:

1) Raising and securing the nesting area in the center of the island so it can stay dry as water levels continue to rise.

2) Increasing the overall size and elevation of the island to provide 5.5 acres of habitat even during high water levels. A total of about 70,000 cubic yards of sand will be added to the island in 2020. 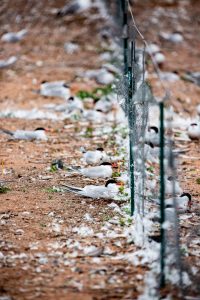 For years, wildlife managers at Minnesota and Wisconsin DNRs have helped the terns hold their ground against the gulls by maintaining a perimeter of chicken-wire fences around the nesting area and a string grid about 3 feet up and parallel to the ground. Terns can hover over the grid’s openings and land safely to nest, while gulls have a more difficult time entering the area. Studies show that these measures have helped the tern colony survive. However, a shrinking island means that the terns are running out of real estate and facing more competition and predation on tern eggs and chicks by the gulls. 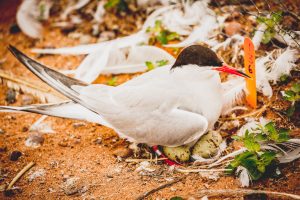 Minnesota Land Trust Lake Superior Program Manager, Gini Briedenbach says, “Statewide there are less than 900 nesting pairs of the Common Tern, and with this coalition of partners working together, our hope is this threatened bird will have its place to nest and thrive in the future.”

View a short video clip about the Interstate Island project.